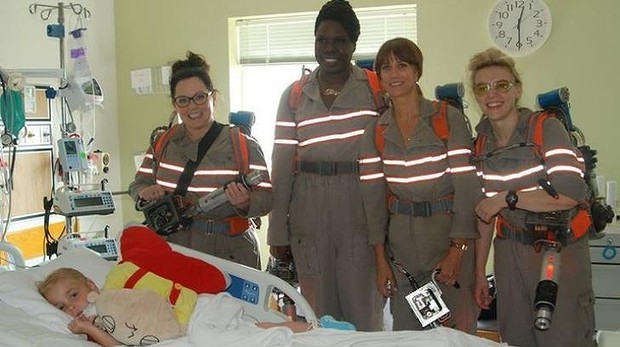 J C explains what he finds objectionable about this photo op:

This picture triggered my natural disgust response. The more I stared at it, the more it disturbed me. I had to determine why:

-the fact that the sick little boy wants nothing to do with a bunch of middle aged women playing at superheroes from a movie that he’s never seen (couldn’t they get Captain America and Iron Man for chrissakes?);
– the fact that the brilliant marketing team behind this thought that it would be a good idea to exploit dying children as a form of promotion for this destined-to-be-steaming-turd;
– their forced and off-putting mugging for the camera in the cancer ward of a children’s hospital;
– a fatty, a sheboon, your mom, and a bull dyke cast in these roles as some sort of “perfect diversity” marketing scheme in an attempt to appeal to SJW millennial femicunts;
– the fact that this film was made at all, shitting on the legacy of the originals.

You can almost hear Stewie’s insolent “suck it, Dust Busters” as he thrusts his loins towards these harridans in a noble attempt at shielding his young charge from their self-serving act of feigned altruism.